The Blood Donation Camp organized by Rishabh Charitable Trust (CSR initiative of Rishabh Software Pvt Ltd) was recently featured in the 35th Anniversary edition of Business Today (published on March 31st, 2013). This activity was listed out for one of the unique ways of giving back to the society. Rishabh Software truly appreciates the 126 volunteers who stepped up to help out with this noble cause. These include current and ex-Rishabhites, their friends and relatives. We also thank the donors from PS Accounting and AK systems for their participation. Over the past 5 years of this initiative, we have donated close to 500 units of blood. Heartiest congratulations to all those who have been involved in this activity, especially the management of Rishabh Software, without whose support this would not have been possible.

Since 2009, the Rishabh Charitable Trust has undertaken several CSR activities such as donating computers, stationery and tables to under-privileged students of local schools. We have also extended a hand to the Lifeline Foundation by donating an ambulance for the Highway Rescue Project.

Here’s a snapshot of the article that featured in Business India: The Rishabh family embraces the spirit of charity. We believe that charity is not just stretching out to the needy by donating money but to go a step further by immersing ourselves in giving back to the society for its non-monetary needs as well. To carry forward these Corporate Social Responsibility activities of Rishabh Software, the Rishabh Charitable Trust was established in 2008. Rishabh Software Featured As The Top Web Developers In India By Clutch.co

It gives us immense pleasure to share that Rishabh Software is now featured on Clutch’s 2019 Report among the web developers in India. Clutch is a trusted market research firm. 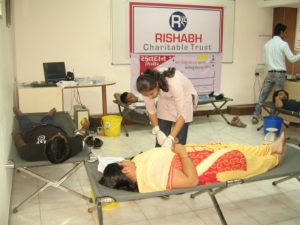 Rishabh Software is proud to announce that it has been featured as the Top eCommerce development company by Clutch.co, helping many enterprise customers to achieve scalability and digitally transform their offline presence to eCommerce stores.