Apple recently launched public preview of the twelfth edition of iOS with a slew of stellar features and performance improvements. So, let’s dive right into the following iOS 12 features list to see what’s new for users, developers and most importantly, enterprises.

Apple has also developed a new AR file format called USDZ in collaboration with Pixar to help enterprises to create new solutions with AR inside. Business verticals from education and retail to healthcare and many others can now build AR-powered solutions to deliver more interactive consumer experiences.

Group FaceTime: Group FaceTime, Apple’s favorite video chat app, will now be able to host group conversations with up to 32 active participants. This cohesive platform does some intellectual stuff at the server level. It combines all the chats into a single slim feed, enabling the system to identify the speaker and display their image to the front. Significantly, FaceTime’s high-end security will be an added benefit for the Apple-reliant enterprises.

Siri Improvements: The improved Siri helps enterprise users automate their personal and professional routines. The powerful machine intelligence capabilities in the backend allow Siri to ascertain if you’re running late and suggest actions which are quite helpful. Siri further allows the developer to deepen their integration with iOS 12. The third-party applications can create Siri shortcuts to take informed actions rather quickly.

Grouped Notification: Though overdue since long, Grouped Notifications for iOS is finally here. Apple has fixed the notification clutter to allow professionals to keep track of most essential tasks, incoming messages, and app-related reminders. You can assign urgency levels to notifications to what Apple refers to as “Critical Alerts.” It implies that you will now have better control over your apps, and to ensure that the less significant ones do not interrupt your work in any way.

Security Improvements: iOS 12 has some robust security improvements. Firstly, iOS 12 will be available on devices as old as the iPhone 5s and the original iPad Air. It makes it easier for enterprises to secure devices as more number of devices will run on the same OS version and keep getting security patches from Apple.

The new iOS 12 features, although incremental it will help enterprises enhance security within their company. iOS devices have a strong presence, and with its every update, Apple is focusing on making its OS more secure for the users, that in a way supports iOS app development for the enterprise world. 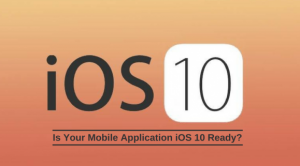 A lot has been said since iOS 9 was launched a few weeks ago. The latest OS by Apple also features a bunch of enhancements that enterprise users will greatly benefit from. Here are the top three important iOS 9 features for enterprises:

At its 28th annual Worldwide Developers Conference, Apple unveiled iOS 11, the next-generation version of its popular mobile operating system. iOS 11 comes with a slew of improvements and features for users and developers alike. Signup for Webinar
Send Us Your Resume