Latest iOS Development Trends You Must Watch Out For In 2019

Apple is ready to take-on and drive the mobile technology boom. And, for 2019 and beyond, Artificial Intelligence (AI), the Internet of Things (IoT), Machine Learning (ML), and Augmented Reality (AR) will continue to rule the tech world. With the release of iOS 12, businesses will certainly eye for leveraging the latest trends in iOS development from one of the innovation led organization. iOS 12 imbibes the best of Apple features like enhanced security, face recognition, and cloud integration to make iOS more competitive. These features are already ruling the technology industry since the last year.

With this blog post, we wish to share some of the latest iOS trends also, how businesses can leverage them to provide the improved user experience.

Want To Develop An iOS App?

In 2019, mobile applications will need to overcome the challenge to “communicate” and exchange information seamlessly with connected objects. It is, thus, vital for any business to update their apps with the latest mobile development technologies.

By considering the iOS development trends of 2019, the organizations can build apps that offer a unique user experience. The frequent upgrades will ensure advancement on security and innovation across all of the iOS platforms. As a preferred iOS development company, Rishabh Software specializes in developing iOS apps. Our team takes into consideration the latest trends to improve the customer experience and boost ROI.

Have An iOS App Idea? Latest E-commerce Trends To Watch Out For In 2019

The e-commerce industry has been booming in the last few decades, and it seems it does not intend to slow down. The evident growth is resulting in companies focusing their efforts on developing a more user-friendly customer experience. As web development evolves, the previous generation techniques cannot tackle the modern-day business requirements. There are a lot of promising and exciting things happening in the world of web application development. Responsive Web Design (RWD) has been a rage for the past couple of years. 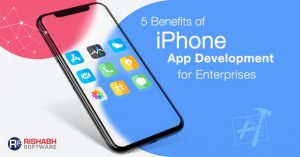 iPhone apps have been the center of focus among mobile users. They are known to be high quality and revenue generating for businesses. Therefore, startups and small businesses looking for a quick return on their investment rely on iOS Application Development for their business.